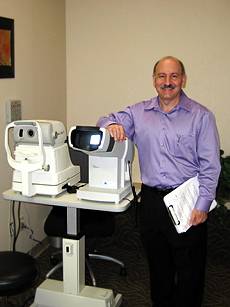 A California native, Dr. Michael Frisch earned his Doctor of Optometry from The New England College of Optometry in Boston, MA in 1985. He did his undergraduate work at the University of California, Los Angeles and, California State University, Northridge receiving his Bachelor of Arts in the Biological sciences in 1981. He founded EyeCare Optometric Center (of Northridge) in 1989.

Dr. Frisch serves as a senior clinical examiner for the National Board of Examiners in Optometry supervising other optometrists and testing optometry candidates for licensure. He served as a clinical teaching assistant in the past. He is also a member of the Orthokeratology Academy of America.

Dr. Frisch has a strong interest in diseases of the eye and is board certified by the State of California in the treatment and management of ocular disease. He has completed additional postgraduate work in laser vision correction and orthokeratology. Other interests include dry eye therapies, keratoconus, hard to fit contact lenses and Gentle Vision Shaping (wearing a contact lens overnight, removing it in the morning and eliminating the need for corrective lenses during the daytime). He also co-manages and is a consultant for laser refractive surgery.

Outside of the office, Dr. Frisch has a passion for landscape photography. His work has won several awards. Other interests include hiking, target shooting with various caliber revolvers and mountain biking. Dr. Frisch resides in West Hills with his wife Sharon, his son Corey and 2 rescued dogs (Tarzan and Jane).